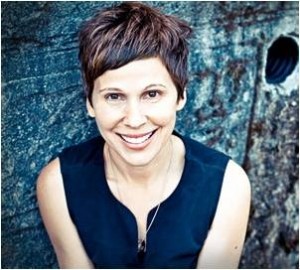 “I’m not looking to make my million dollars tomorrow, it’s more about building my name as an author.” – Ingrid Ricks

As part of our series, Indie Authors Doing it Right! whereby I interview authors who are rocking their book marketing plans, I spoke with Seattle-based author and speaker Ingrid Ricks. Ingrid is the author of two books – Hippie Boy: A Girl’s Story and Little Book of Mormon (and not so Mormon) Stories.

Book 1 – Hippie Boy: A Girl’s Story – a memoir. About how a girl escapes an abusive Mormon stepfather by living as a vagabond with her Dad until his arrest forces her to take charge of her own life.

Book 2 – Little Book of Mormon (and Not So Mormon) Stories – about growing up with a very strict immigrant Mormon mother and an excommunicated dad. Finding your own voice and beliefs. Learning not to judge and understanding for peace and happiness is that everyone has their own personal spriritual beliefs.

Hippie Boy took 10 years to write. (Started as a journalist and went into marketing). Would work on it every once in a while.  She finally put it out there after two ah-ha moments:

1. Diagnosed with a degenerative eye disease eight years ago. This resulted in more focus on life, but not on dream until second ah-ha moment.

2. Two and a half years ago,  daughters were doing a parody of her as an old lady who still hadn’t finished her book (but was always talking about it).

Didn’t want to teach daughters that you’ve got this dream but you don’t go after it.

Finally buckled down – had a different focus. Got up at 5 or 5:30 and cut back on client work to make the time.

5 months later (2010) Ingrid had a book, launched a website, social media, wrote a book proposal and landed an agent (August, 2010)

– Agent told Ingrid she needed a huge author platform or I could kiss my career goodbye.

What Ingrid did to increase her platform:

– Started building a network of followers and Scribd would feature her resulting in 10K readers.

– OpenSalon – short essay excerpts were getting cross-promoted to Salon.com.

– Started getting invited to different podcasts and one that was very instrumental (only a year ago.)

Up until January 2011, Ingrid was working with agent – sent to about 6 publishing houses and all wanted to read manuscript, but eventually said that memoir market is saturated and “good luck”.

– Hired a book editor to help with early chapters, got 17 pages worth of feedback and worked on it for 6 weeks.

Was invited to do a Mormon podcast for an hour – told her story and afterwards, their blog was flooded with people who could identify with story.

LPW: Built your platform before you published. Were your marketing skills transferrable?

IR: Helps to have the marketing background. Understood I needed a good cover, website, online presence. I knew if I didn’t work to get awareness and reviews from credible sources, the book wouldn’t go anywhere.

Understood sampling and giveaways, knew that had to take advantage of Amazon KDP Select and was one of the first to enroll in the program.

LPW: What are you most proud of?

Got more than 50K ebooks out there, 6K paid copies sold. The momentum continues – not gangbusters, but slow build off of exposure. Whether it’s emails from people reading it, featuring it on blog, etc.

– Other high schools coming on board and using the curriculum developed with the teacher.

– All about cross-promotion – gaining on both books.

“Not looking for tomorrow to make my million dollars, more about building my name as an author.”

LPW: Sensible and level-headed view of yourself as an indie author. What is your long-term strategy?

IR: Learned authors that are successful are those writing quality, professionally edited books and continuing to put them out.

– Tries to do one thing every day to push Hippie Boy further.

– Out out a book every 6 months

– Take on more of a publishing role working with under-served community.

– Focus on writing – put out a quality product the first time. Don’t get too excited to put your work out there before it’s ready.  Be patient.

– Start slowly – look at OpenSalon and Scribd, build your name as an author. Cross-promote

– Find two or three authors you really like and love their work and promote each other. Make sure it’s genuine

“By the mile it’s a trial

By the yard, it’s hard

But by the inch it’s a cinch.”

“You never know what you can accomplish as long as you keep on going, as soon as  you quit you have your answer.”

Find out more about Ingrid, her books  and the wonderful work she is doing at http://IngridRicks.com/