Because I continue to meet authors who are unconvinced of the value of Twitter, or unsure of how best to use it, I am deciding to write this post. I hope my own examples of building a Twitter network will help you understand how to use Twitter effectively as part of your book marketing plan. ~ 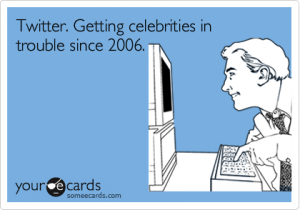 I know that in the beginning of your indie journey (or even further down the road), when someone tells you that you “must jump on Twitter” in order to market your book, it’s hard to see the connection between sending out short messages a few times a day and selling your books.

I get it because I’ve been there! In the beginning, while I enjoyed connecting with a few famous people on Twitter (how excited I was when I received a message from Jamie Oliver!) I couldn’t quite grasp the connection myself. I certainly wasn’t convinced that Jamie wanted to help me promote my wedding guides. I had this nagging feeling that though it was fun, I might just be wasting my time.

But at some point it started making sense to me. This got me wondering, when was that point, and how can I explain this to the un-converted?

I believe that Twitter started making sense – and becoming valuable to me – when I wrapped my head around the fact that Twitter is just another place to have a conversation that you would anywhere else on earth. It’s just an unfamiliar place, at least in the beginning, and that’s the problem for most people. We’re not quite used to having conversations in exchanges of just a few words, and oh-so publicly.

But once you envision Twitter as the coffee shop, or outside your kid’s school, or in the University cafeteria, or [insert other public place where it’s acceptable to talk to strangers here], you will start to use it in the way it’s meant to be used, and in a way that works.

Much like if I were in a public place where it was acceptable to have chit-chat, I started replying to people’s queries and questions, asking my own questions, sharing (re-tweeting) interesting news or announcements, mentioning articles that I thought contained really valuable advice and so on. I wasn’t forcing anything, rather I was building valuable relationships with people who were interested in my books and, as a result were willing to help me spread the word about my books.

Let me jump over to my Twitter stream and show you some ways in which I use Twitter now (oh so different to those early days!), and hopefully it will begin to make more sense to you too:

1. I share the word about a course that I believe will bring real value to people, because I highly respect the teacher of it (Jane Friedman).

2. I ask people for a small favor in a friendly, conversational way. 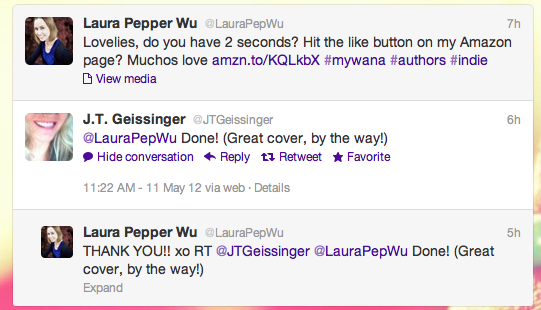 3. I make connections with other local authors online, so we can meet offline:

And here is how people interact with me in turn:

4. Sharing articles I have written because they think it provides value. I get a lot of new traffic that way so Twitter helps spread my reach.

5. People thank me for sharing their links too.

In a nutshell, Twitter helps bump up your exposure, increases your access to resources, broadens and strengthens your network, all of which leads to more opportunities to sellyour books. YES it might not be a direct connection, but that’s the beauty of it.

You aren’t directly trying to sell anything on Twitter. Instead, think of Twitter as one of THE best ways to expand your network, communicate with more people, and get access to important news and advice in your given field. By forging relationships, supporting your peers, and providing value in abundance you will in turn widen your opportunities. In fact it’s a goldmine of opportunities.

One thing many authors DON’T do right on Twitter is use hashtags (at all), or use them PROPERLY. Hashtags are in fact one of the best ways to use Twitter by plugging your Tweets into the online writing community and allowing you to interact with the right people. Here’s an article on the importance of using hashtags and a list of the best hashtags for writers.

The blog for 30 Day Books - a book studio. Grab a drink and stay a while!

Laura’s class has given me the tools and the confidence to sell what I am certain will be great numbers of books. She is an outstanding teacher (I should mention that I taught college English for 25 years, and that I was publisher of a small press for about eight years).

Before Publishing Your eBook: a 3-Month Checklist

We use cookies to ensure that we give you the best experience on our website. This includes cookies from third party social media websites if you visit a page which contains embedded content from social media. More info