My two blog posts on how – and why – to use Twitter are among the biggest hits on this blog. But even for those who understand the value of this micro-blogging system, once it reaches a certain point Twitter can become daunting and unmanageable. Tweet after tweet of stuff you really don’t need to know or care about from people you may not even know – the sheer volume can be enough to turn off your feed completely!

It’s all a matter of organization by way of lists. By properly using the lists and groups feature Twitter offers, you can organize your contacts, stay in touch with a cherry-picked group of folks, and streamline your time spent on Twitter.

The Beauty of Lists

Using Twitter’s List feature, you can build communities and groups that will help you in a number of ways:

How do they work?

Lists allow you to organize your feed into groups, providing you with an overview of what the members in each ‘group’ are up to – as opposed to everyone you’re following.

Create as many or as few as you want. For example, I have:

– Fellow writers
– Bloggers I like
– Offline friends!
– Ladies Who Critique members
– Publishing industry professionals
Then, depending on what I’m in the mood for, I can click on a list and read the tweets only from the people in each group.

How to Do It

You’ll see this icon on the top right of the page. Click on it to create a new list.

This will open up. 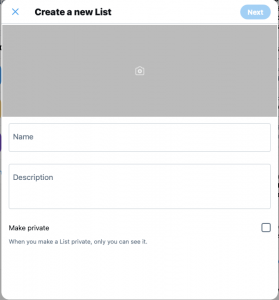 Here are a few tips designed specifically to authors:

Lists to start with  – To get started, designate a few lists like, “Readers,” “Fellow Authors,” or “Family and Friends.” Pop followers (or even people you aren’t following) into these groups and you’ll be able to keep tabs on what they’re talking about and stay in touch with them in the Twitter Wild West. You can even create groups based on locations and themes if you want to retweet info about places or themes from your book.

Curate a list of experts – one of the main reasons Twitter started the list feature was so that users would use them to recommend cool and interesting people to each other.  Make a public list (or two or 8) of Twitter users other people should follow such as ‘Mystery Thriller authors’, or ‘Southern Writers’, and you’ll not only be doing your fellow authors a favor, you’ll gain followers as a result (people can choose to follow entire lists).

Head to Reedsy’s excellent post for more on how to use social media as an author.

What are your favorite lists for writers/ publishing? Check out some of these:

Six Ways Authors Can Promote Their Books on Pinterest